As part of my current day job at Nevada Humanities, I’ve started to make pieces for Reno Public Radio, aka KUNR, which are airing under the collective title of “Nevada’s Hidden Stories”; the tagline is: “an occasional series which focuses on the unique people, places, and communities that make Nevada the place we call home”. 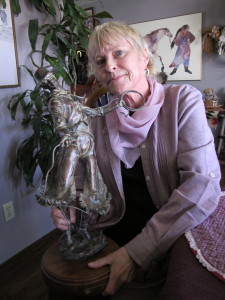 The latest edition of Nevada’s Hidden Stories featured writer, photographer and Nevada resident, CJ Hadley, who was recently presented with a prestigious Wrangler Award for Outstanding Poetry Book from the National Cowboy and Western Heritage Museum in Oklahoma. The award honored the latest book from Range Magazine, which Hadley founded, edits and publishes. It’s called Brushstrokes and Balladeers: Painters and Poets of the American West.

I’d actually met CJ for the first time at the aforementioned Cowboy Poetry Gathering where she was collecting material for Range, a publication which is – according to its website – “devoted to the issues that threaten the West.” I’m always interested to find out more about foreigners who love America as much as I do, and was particularly intrigued when I learned that the person behind Range was an Englishwoman from the industrial Midlands city of Birmingham – quite the contrast – so I decided to pay a visit to her home in Washoe Valley to find out more about her and her personal beliefs and motivations.

Here is the piece that resulted: