I’ve long been interested in old buildings and historic preservation, and so after moving to Nevada, I was delighted to join the board of Preserve Nevada. It’s a statewide organization, based at UNLV, that is dedicated to the preservation of Nevada’s cultural, historical, and archeological heritage. 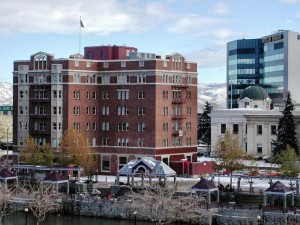 Every other year, Preserve Nevada puts out a list of significant places that it deems to be of concern in some way in terms of historic preservation. Usually there are just 11 names on that list and normally, they are all considered “endangered”. However this year, to mark Nevada’s sesquicentennial, the board came up with 150 places which fell into three categories– so not just sites that are endangered, but also those considered preservation successes, as well as places that have been lost.

Since the release of the list took place during the month of May, which is officially designated historic preservation month, I used some of the sites on the list as a starting point to make this radio report about issues of historic preservation in the Reno area. It included the contributions of my fellow board members, former deputy State Historic Preservation Officer Alice Baldrica, writer and historian Alicia Barber, Preserve Nevada founder and UNLV history professor Andy Kirk, and board chair Senator Richard Bryan.

If you’re interested, you can listen to it here.