I wanted to introduce visitors to this site the Columbus Folklorists Circle discussion group (CFC) which myself and several OSU-based colleagues formed over the summer. We now meet every six weeks or so to discuss an issue that is current/relevant/otherwise of interest to those of us who reside in folklore world. It’s primarily aimed at anyone who identifies as a folklorist – or folklore-friendly – in the Columbus area (i.e. not just those who are affiliated with OSU). 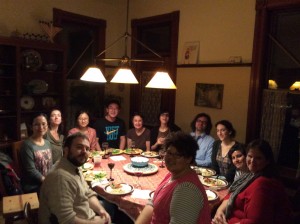 How it works is that members suggest possible discussion themes and ideas and the one for the upcoming meeting is then chosen by popular consensus.  Then, ahead of each meeting, the person who suggested the chosen subject supplies prospective attendees with light preparation materials to peruse in a timely manner (the emphasis is on “light”). In addition, at the meeting itself, they also softly steer the discussion itself, perhaps starting with an intro of why they picked the topic and posing a few questions to get us underway.

The time/date of each meeting is chosen by Doodle poll.  The venue changes each time but generally takes place in a member’s home.

We’ve met a number of times so far and it’s been useful and fun.  The topics have included: “the ethics and ethnography” (inspired by the Alice Goffman debate), “the folklorist as activist”, “folklore and the pitfalls of orientalism”, and “AFS Long Beach 2016 – how was it for you?”.

The first meeting of 2016 is on the subject of “Diagnosing Folklore: Perspectives on Disability, Health, and Trauma” and it takes a newly published collected volume of the same name as its starting point. See http://www.upress.state.ms.us/books/1862. Olivia Caldeira will be leading the discussion. She has contributed a piece to the aforementioned book, as has Professor Amy Shuman.