Here is a copy of my latest blog-post for Nevada Humanities:

This year, as last, I was thrilled to have the opportunity to attend the National Cowboy Poetry Gathering  in Elko, Nevada. It was the event’s thirtieth anniversary and since that milestone happened to coincide with its home state’s sesquicentennial celebration, there was – for the first time in the Gathering’s history – a special focus on the cowboy culture of Nevada. 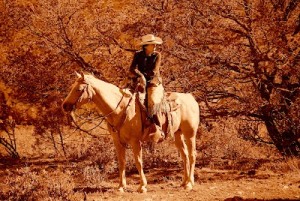 Consequently, there were a number of sessions with a Silver State theme, including a Friday night sell-out show entitled “Nevada in my Heart”. It featured a range of performers who all possessed, in different ways, a significant connection to this place and was presented by the cowboy poet and 2012 Nevada Heritage Award winner, Waddie Mitchell. Mitchell commented that there weren’t so many states whose residents identified themselves as natives – “Who says ‘I’m a Rhode Islander first and foremost?’” he asked – however, he was indeed proud to be a “Nevadan” above all else.

I recorded the show as I’m making a radio piece about the Gathering for KUNR and I thought I would share a couple of the performances from that night for the simple reason that they were just so darned funny.

First up is rancher and writer Deanna Dickinson McCall. Though she now lives in New Mexico, Deanna ranched in a remote corner of Nevada for 22 years without electricity or phones. Here is she introducing her piece called “Advice” which had us all in stitches.

Carolyn Dufurrena was raised mostly on the east coast but fell in love with Nevada during a college field trip. Various return visits led to her meeting and marrying a rancher in Humboldt County and that’s where she’s made her home for many years. Carolyn has worked extensively as a teacher and writer, and recently served as the outside editor of a new tome of Western poetry and art called Brushstrokes and Balladeers. She is also, by the by, one of Nevada Humanities’ board members. Here is her piece entitled “Highway 140 Traffic Report”; it totally cracked me – and the rest of the audience – up.